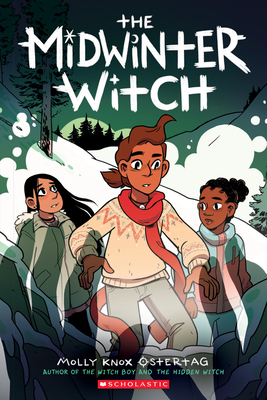 THE MIDWINTER WITCH is the third and final book of the adventures that includes The Witch Boy and The Hidden Witch.  A wonderful twist on traditional middle grade themes of identity, conflicts with family and friends, and solidifying values and a path forward, Ostertag wraps up the story of Aster and his family and friends by staying true to her focus of gender non-conformity and belonging.

While Aster and his nervousness about competing publicly as a witch is one major thread in the story, Ariel’s story moves into the spotlight as well. Her search for where she came from and the push and pull of the choice between traditional and dark magic create both conflict and temptations that threaten to drive the friends apart. Ostertag skillfully intertwines individual character challenges and the overall story arc to create a tense, heartwarming tale that feels relatable despite the fantastical world in which the events transpire.

THE MIDWINTER WITCH is a worthy final book of this series. Highly Recommended.

Adjusting to car culture, dealing with leaving a career I loved, and spouting off along the way. Do The Most Good.
View all posts by That Unique* Weblog →
This entry was posted in Review and tagged Fantasy, gender non-conformity, graphix, LGBTQ, magic, middle grade, Molly Knox Ostertag, multi-ethnic, Scholastic, The Midwinter Witch. Bookmark the permalink.

2 Responses to Review: The Midwinter Witch by Molly Knox Ostertag