Review: Cannabis – The Illegalization of Weed in America 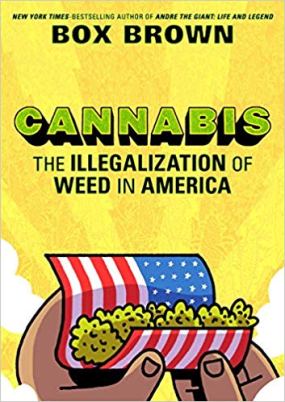 Cannabis: The Illegalization of Weed in America, Box Brown’s impassioned history lesson about Cannabis and its journey towards illegalization, takes readers from ancient religious traditions in India (see an excerpt here) to Mexico to opaque motivations and actions on the part of the US government to modern day efforts to re-legalize the plant and its use. In what comes across very much as a labor of love, Box Brown doesn’t hide his positive bias for Cannabis, nor does he subdue his frustration and anger at how the plant has been misrepresented for both racist control of populations and cynical motivation for power. No matter where your views regarding legalization of Cannabis land, this graphic history is filled with interesting, shocking, and thought-provoking details and events.

Brown’s unblinking, critical eye confronts the racist and sexist control of Cannabis around the world, the junk science and false narratives that widened a predatory practice of arresting Black and brown people for marijuana under the guise of saving white youth and women, as well as the Nixon White House and its “Marihuana Report.” In clear and organized detail, the graphic panels question motives and point out inconsistencies throughout the historical efforts to control and eradicate the use of Cannabis.

Box Brown reserves a special and methodical ire for Harry J. Anslinger, the first Commissioner of the Federal Bureau of Narcotics, appointed in 1930. Despite Anslinger starting out with a focus on heroin, and considering marijuana a minor distraction, the end of prohibition threatened his job. He soon made sure to center Cannabis products complete with “Gore Files” that detailed how smoking marijuana drove people into homicidal rages. Contradictions abounded with examples of marijuana use causing violent episodes AND causing users to laze about. Anslinger also blamed Marijuana for both impotence AND sexual stimulation. Despite these discordant tales, fear was fueled and monetary opportunities were recognized, resulting in the Marihuana Tax Act of 1937.

Brown also highlights skeptics of Reefer Mania, like New York Mayor Fiorello, who commissioned his own study of to observe the effects of Cannabis on individuals. In contrast to earlier narratives from Anslinger and the Federal Government, the New York study showed no effect on the morality of subjects, even as the newspapers and Anslinger’s testimony continued to claim the opposite. However, this study had no effect on legislation, and Anslinger soon introduced his “Stepping Stone Theory” to heighten fear. (Now referred to as the Gateway Drug Theory.)

Brown makes sure to spotlight the racial disparities in arrests and harshness of punishment. In CANNABIS, Brown details how Jazz musicians were a favorite Anslinger target, including Louis Armstrong and Billie Holiday. Brown points out that Holiday was harassed for years and arrested for narcotics possession even as she was dying of cirrhosis of the liver. Testimony from addiction experts that disputed the “stepping stone theory” and the violent tendencies tied to Cannabis was cast aside, and by 1952 Cannabis was put in the same category as heroin. The same Federal act dictated mandatory minimum sentences for drug offenses. 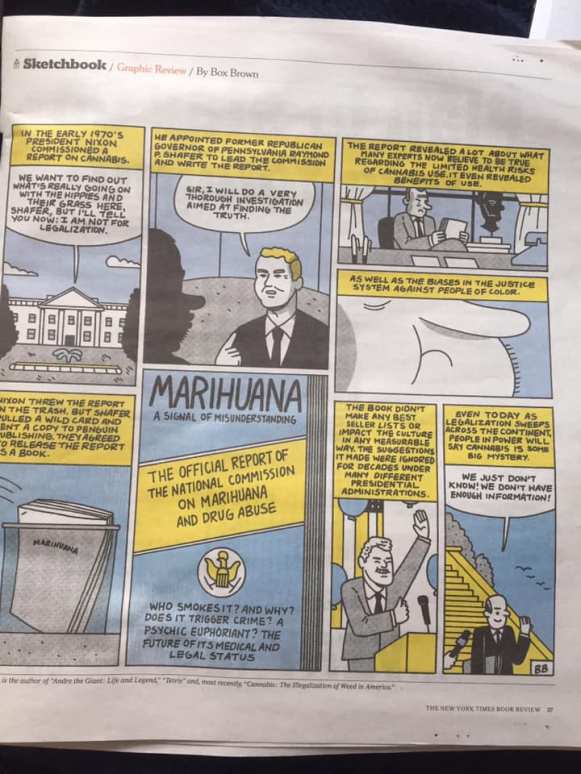 A particularly salient section of the novel centers on the Nixon White House. In 1970, Nixon commissioned his own Cannabis report to bolster the Controlled Substances Act, but his own commission came back with a report that disputed the Gateway Theory as well as the addictive quality of Cannabis. It even recommended that marijuana be descheduled and declassified. Nixon trashed the report and ordered easier-to-manipulate hearings instead.

Because the graphic novel is about the ILLEGALIZATION of weed in America, the end of the book feels like a quick and abrupt close. Mentions of Nancy Reagan and “Just Say No” and details about medical marijuana seem sparse after the in-depth pages that precede them. One highlight is a brief but inspiring mention of Dennis Peron, a Cannabis activist inspired after being arrested for possession of marijuana used for his lover’s AIDS symptoms.

CANNABIS: The Illegalization of Weed in America reads like an enthusiastic user’s testimony in passionate defense of a dear friend. However, the in-depth research, clear examples and text, and varied narratives give leeway when warranted. They also reveal a deep understanding of the social justice, historical, and recreational values entangled in the relationship the USA has with marijuana and all Cannabis products.

Those who read the graphic novel, whether they come with painful baggage that feeds opinions against Cannabis or a carefree “Legalize It” attitude towards weed, will definitely learn a lot and perhaps adjust the context wrapped around the history of the herb.

Cannabis: The Illegalization of Weed in America by Box Brown is available April 2, 2019 from First Second Books.

Adjusting to car culture, dealing with leaving a career I loved, and spouting off along the way. Do The Most Good.
View all posts by That Unique* Weblog →
This entry was posted in Activism, Review and tagged Bhang, Box Brown, Cannabis, Dennis Peron, First Second, Graphic Novel, marijuana, review, The Illegalization of Weed in America. Bookmark the permalink.