Like many parents, I swore that my kids wouldn’t watch any television (or play with plastic toys, or eat non-organic fruit) until they were at least (fill in appropriate age here). It didn’t take long to use Baby Einstein videos to keep my six-month-old distracted in his pack-n-play while I ran out to double-park the car every Tuesday and Thursday. (Yes, he was alone in the apartment for five minutes. Send complaints here.)  And then I started using them to take a shower, feed him dinner, and lay down on the couch when I was very pregnant with his future Frenemy.

And once the second kid came along, it all flew out the window. I blame getting rid of cable. See, to make up for the lack of Noggin (old school for Nick Jr.), we bought a five-pack of DVDs. Dora, Backyardigans, that sort of thing.  It was great! But they had an evil feature that soon overpowered me: Continuous Play. All five shows would play one after the other to create 105 minutes of a blissful, zombie-like toddler.  That became a daily coping mechanism, and I’d run around like crazy for those 105 minutes doing all the things I couldn’t with two cherubs pulling at every limb and belly roll and boob.

Yes, I went headfirst down the slippery slope of kiddie television.

Has it hurt my kids and their potential? Possibly. They still get a lot less television than they could, and I limit it to shows that are made just for kids – not for the parents of kids. And at 5 years old, my son has been recently introduced to the Feature. Naturally, his younger sister was introduced as well…so she’s going to be stunted for sure.  But then I see this kind of stuff:

Inspired by Pixar’s Up.

We watched Pixar’s Up during the five days of rain we had during our recent vacation.

And my daughter, who has a markedly different drawing style, recently made this after seeing an episode of Team Umizoomi. 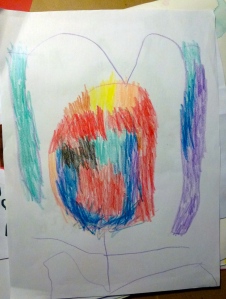 My daughter’s portrait of Milli from Team Umizoomi.

I’m not too worried about their creativity being wrapped up in that zombie stance I see sometimes when they’re soaking in an episode of Spiderman from the 60’s. I just make sure that they get opportunities to act it all out or draw it all out later.

Do you remember watching a lot of television as a young child? Did you create pictures as awesome as my kids’ artwork? (Impossible!)

Adjusting to car culture, dealing with leaving a career I loved, and spouting off along the way. Do The Most Good.
View all posts by That Unique* Weblog →
This entry was posted in Lazy Mom, Parenthood and tagged art, Backyardigans, Nick Jr., Noggin, parenting, Pixar, surviving toddlerhood, Team Umizoomi, television, Up. Bookmark the permalink.